Escalating his feud with Austin city leaders over how to address the Texas capital’s problem of homelessness, Gov. Greg Abbott is planning to begin housing homeless people on state land.

The announcement comes just days after state officials began clearing people out from underpasses (Link) Monday, a move taken in opposition to the policy the city council adopted this summer allowing camping in public, which raised the visibility of the city's homeless population (Link).

Mr. Abbott’s office said Thursday that it will begin allowing people to camp on a 5-acre plot of state-owned land in southeastern Austin. The property will have portable restrooms, hand-washing stations and an agreement from local charities to service meals there, said John Wittman, a spokesman for the Republican.

“This is the governor following through on his commitment,” Mr. Wittman said. “He said he would clean up downtown.”

Austin Mayor Steve Adler said he appreciated any assistance in responding to homelessness in Austin, but said the city’s efforts will remain on finding permanent housing for people. City staff members over the summer recommended against putting resources toward designated camps, saying they often end up becoming permanent and taking effort away from permanent solutions.

Before Monday’s clearing out of the state-controlled underpasses, Mr. Abbott had for months threatened state intervention and encouraged constituents to tweet videos of homeless people behaving badly in Austin, signaling his displeasure with the city’s policies. Austin council members and advocates for the homeless criticized him for pushing people with nowhere else to go into hiding.

The plan announced Thursday provides a new option, Mr. Wittman said, though he emphasized it is a short-term solution.

Austin Chamber of Commerce representatives, meanwhile, announced a longer-term effort Thursday to address homelessness. The chamber said it is forming a coalition with faith-based partners to try to raise $14 million to build and operate one or more shelters that can hold about 150 bunk beds. 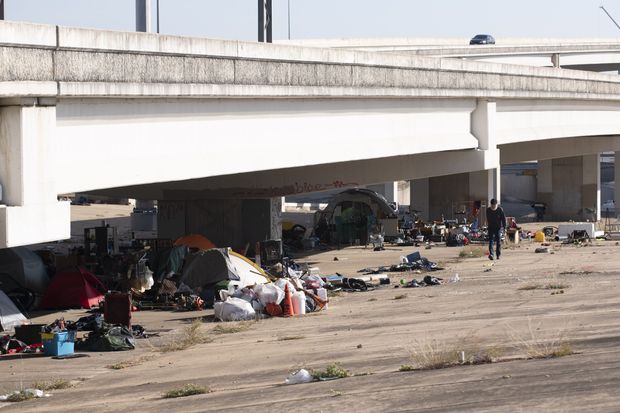 Both new efforts could have political implications on an issue where Mr. Abbott and other Republican leaders have accused the liberal city government of failing in leadership. Conservative state leaders have in recent years railed against Texas’ left-leaning major cities, focusing legislative efforts on overturning local ordinances.

On homelessness, Mr. Abbott has found increasing support from some city residents who say they are frustrated with the growing impact of homeless people.