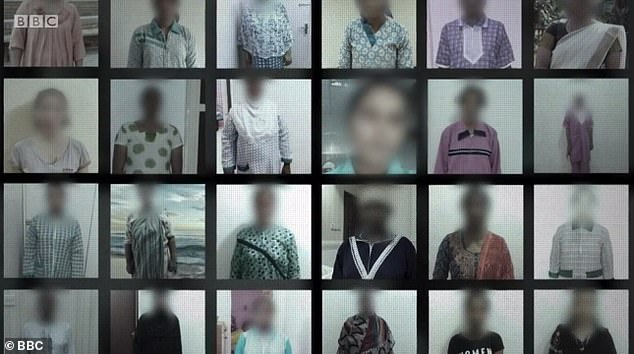 Technology giants Google, Apple and Facebook have been accused of facilitating an online slavery market.

An undercover investigation by BBC News Arabic found smartphone apps in Kuwait where potential buyers can scroll through the details of thousands of women available for domestic service.

UN special rapporteur on modern slavery Urmila Bhoola told the BBC: 'What they are doing is promoting an online slave market.

'If Google, Apple, Facebook or any other companies are hosting apps like these, they have to be held accountable.'

The investigation found that one market operates on Instagram, which is owned by Facebook. It is reported that sales are conducted through private messages.

The tech giants told the BBC they are working with app developers to stop the illegal activity.

They also suggest selling people online is against their terms and conditions.

However, the BBC sent a couple under cover claiming they were newly arrived in Kuwait and were seeking domestic servants.

They visited one site where women were filtered by race - with some people worth more than others.

One advert claimed an African worker was 'clean and smiley', while a second warned the Nepalese person for sale 'dares to ask for a day off'.

Some of the adverts are from people looking to sell their own domestic staff.

Even one police officer was trying to sell his domestic worker who he described as 'very nice' and with a 'smiley face' and never complains.

The officer claimed it was possible to buy a maid and sell her on for a profit.

Although he warned that you should keep your maid's passport.

The BBC team even received the opportunity to buy a 16-year-old girl who had been trafficked in from Guinea, West Africa.

The owner said the girl, was not allowed any time off and did not have any access to her passport or mobile phone.

Nearly 25 million people worldwide are estimated to be victims of forced labour, while about 25,000 human trafficking cases were recorded globally in 2016 - marking a 13-year-high - according to the latest available data from two U.N. agencies.

The number of informal workers globally is set to swell as low-skilled labourers lose out to automation and others take short-term jobs offered through digital platforms, say labour activists who warn of the increased risk of modern slavery.

Two billion people - more than 60 per cent of the world's workers - are in informal employment, where they are not covered by formal arrangements, such as a contract, or lack protections including sick pay, U.N. International Labour Organisation data shows.

Across much of the Gulf, most domestic workers are supplied by agencies who initially register them with the applicable government.

The agencies then supply the staff to families who sponsor the worker and pay a large fee.

However, the maid cannot quit and is not allowed to leave the country without the permission of their employer.

According to the BBC, the new online marketplaces are bypassing the traditional agencies and undermining the conditions of domestic staff.

The informal online trading leaves the women at risk of abuse.

The 16-year-old girl from Guinea was sent home by Kuwaiti authorities. She told the BBC: 'They used to shout at me and call me an animal. It hurt, it made me sad, but there was nothing I could do.

'Even now, talking about it, I'm still happy. My life is better now. I feel like I'm coming back from slavery.'

Kuwaiti authorities said they have rules to prevent exploitation and trafficking.